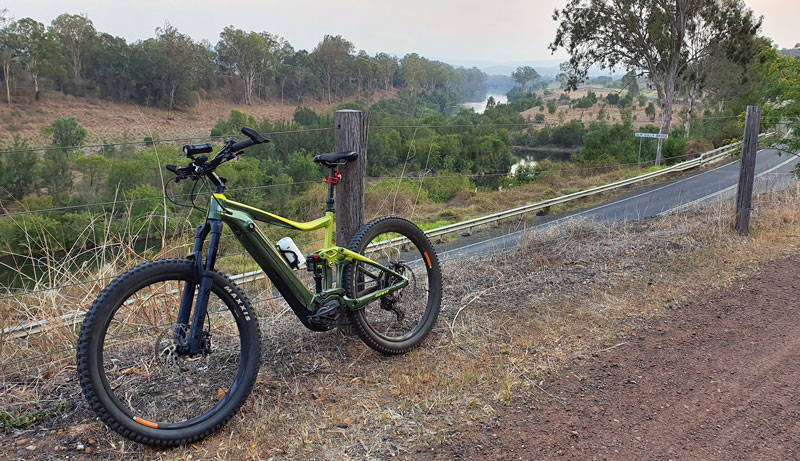 Feeling a bit stir crazy after all the stress of our bushfire evacuation over the weekend, so headed out just before dawn this morning for some BVRT therapy.

I wouldn’t describe the temperature as fresh, but certainly much cooler than daytime.

Cycled into Fernvale via the back way to avoid the Brisbane Valley Highway and then a shortcut through Fernvale Sports Park and onto the rail trail.

A few dog walkers about, but otherwise I had the trail to myself, so we set a brisk pace on the beautifully conditioned hardpack. Increased traffic on the BVRT has really improved the surface in many locations.

The Giant Trance E+ Pro moved forward eagerly as dawn broke, each pedal stroke amplified by the Yamaha drive. This is the life.

Stopped to take a photo at the classic viewpoint near Lowood with the Brisbane River as the backdrop. Smoky haze on the distant mountains.

As I continued, I reflected what it’s like to live in an area that has been drought declared and so dry you daren’t even burp for fear of causing a fire.

The people are still the same but adversity makes them stronger and somehow more mindful of each other. Proud to be a Somersetian.

Into Lowood and tried out the planned new intersection crossing of the main street for the BVRT in my mind. It’s going to be a two-step process, but much safer then the current situation where you cross diagonally and have to watch out for traffic from three different directions.

Then onto the rougher surface on the way out of Lowood and through Pete’s Native Garden, looking dusty and dry like everything else, but still an oasis of greenery on either side of the trail.

The good news is that grids are planned and should be installed in the first quarter of next year, so just a minor blip in the enjoyment of the moment for my ride today.

Over Clarendon Station Road and onto Wayne’s farm with the very photogenic old Queenslander up on the hill. Cruise down to the Lockyer Creek Bridge and take a couple of photos in the hazy sunshine.

Breakfast is now calling, so turn around and back to Fernvale with head down and bum up. A soft, friendly greeting as I enter Tree Change café where the locals hang out. I find my good mate Darren Zanow is having breakfast there after raking some hay.

We had chat about the drought and the bushfires and then he was off to start the day with his first meeting.

For a short time I was left to my own thoughts, but not for long.

I spied Harriet and Barry Cresswell with their friend Colin Trim crossing the road from the rail trail and heading for the café.

They had cycled up from Ipswich for a Fernvale breakfast.

We had a good chat, but then it was getting hot and time to make a move.

As I headed back home, it was still so early that the School crossing lady was just setting up.

A quick return blast around the back route and then back up the steep hill to home sweet home…and aircon.

A good bike ride, good company, good food and good coffee, what better therapy does anyone need than that? Paul H.