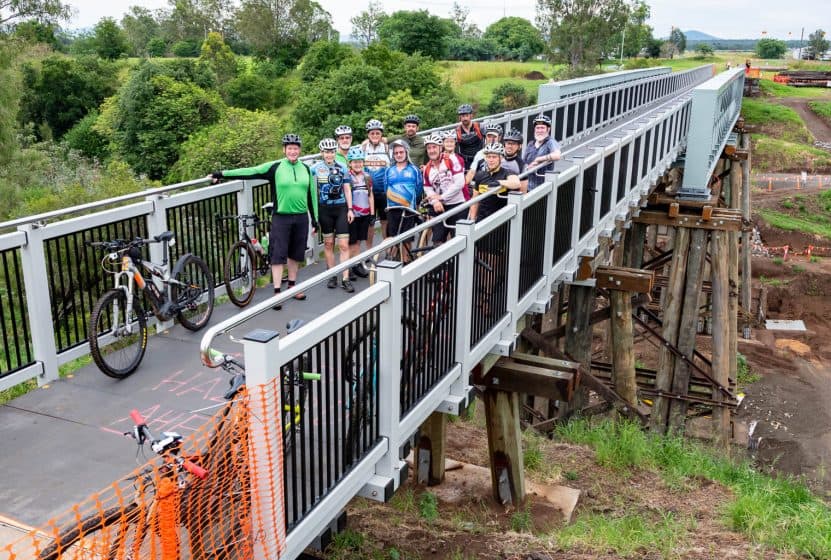 It’s been an amazing season for the Brisbane Valley Rail Trail. We have never seen so much traffic since the new section between Toogoolawah and Moore opened. A continuous stream of cyclists, hikers, runners and horse riders following the old Brisbane Valley Railway line all the way from Wulkuraka to Yarraman, every day of the week and some nights too.

The cooler months favour outdoor activities in Queensland, so we can expect a tailing off for the next three months of summer, but even with the potential heat, all 100 places on our annual Australia Day bike ride from Fernvale to Esk on 26 January were booked out in under 24 hours.

Most of our campaigning over the last 5 years has been targeted at getting the rail trail completed, but there are a few other big-ticket items that have been a focus for our activities, such as getting some of the old bridges decked.

We had a major win on that front this year with the heritage listed Lockyer Creek Bridge. It was likely to collapse soon unless something was done about it. Some of the bridge supports may have looked solid, but they had rotted from the underneath and were being supported by the bridge rather than the other way around.

We campaigned for the bridge to be renovated and decked so that it could provide safe passage across the creek for many years to come.

We were fortunate that the dedicated railway corridor team in DTMR agreed with us and successfully lobbied the Queensland Government for the $4.5 million required to do the job.

The bridge has been totally renovated with all the rotten wooden beams replaced. Then the steel trusses in the centre were craned onto the bank and encapsulated in plastic sheeting so the lead paint could be safely sand blasted to remove it. Any rusting rivets were relaced and then the trusses were completely repainted before being craned back onto the bridge.

The final stage of the renovation is the fiberglass composite decking structure for cyclists and pedestrians.

There is still some landscaping work to be done, but the bridge is open to users just in time for Christmas, with the remaining works to be completed in January.

There are some who say they preferred the old route involving a steep descent down a sketchy dirt track into the deep gully and hard climb up the other side. That will still be there, but I suspect the majority will choose to experience crossing Lockyer Creek on the newly renovated bridge.

Lockyer Creek bridge will be an awesome tourism attraction for our region. It will further increase traffic in the southern section of the Brisbane Valley Rail Trail, bringing more valuable tourism dollars to the towns of Fernvale, Lowood, Coominya, Esk and beyond.

New counters have been installed at several locations on the Brisbane Valley Rail Trail, so we should start getting some hard data on the number of users soon. Early reports are that the numbers are very high.

We have come a long way from the days when I could cycle on the completed sections of the rail trail for days at a time and never meet another soul.

The Brisbane Valley Rail Trail is now one of the most important tourism attractions for the Somerset region, easily competing with the two dams for the number of visitors.

Just one hour from Brisbane’s CBD, Australia’s longest rail trail offers something for everyone.

What could be a better use of an old disused railway line than to give so much enjoyment to so many people?