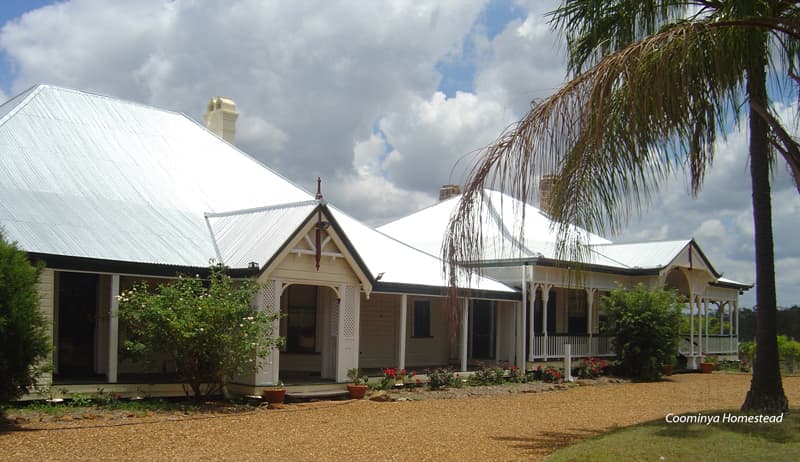 More of a village than a town, Coominya is a welcome rest spot on the Brisbane Valley Rail Trail between Fernvale and Esk or a good place to start your journey as there is plenty of parking. The area around the old Coominya Station boasts a great collection of murals with interpretive signage.

Originally known as Bellevue, the village was later named Coominya. Its aboriginal meaning from the Yugarbul dialect of the area was “I see water”. Timber was the mainstay, and a sawmill operated opposite the railway near where Bellevue Homestead now stands. Bellevue Homestead was moved from its original site on the banks of the Brisbane River between 1975 and 1980 to save it from the rising waters of Wivenhoe Dam and then restored as an example of early European settlement in the area. Originally owned by the National Trust, Bellevue Homestead is now privately owned. The railway arrived in 1886, followed by the Bellevue Hotel and Post Office.

Attractions in the Coominya area include the historic Bellevue Homestead, and Vineyard moved from Wivenhoe Dam to Coominya by the National Trust in 1975.

Services for Rail Trailers include a pub, a small shop, a servo/café, post office, toilets and a very pleasant picnic and BBQ area.

Bellevue Homestead can provide b & b accommodation by prior arrangement.

In the far corner of the community recreation area on the other side of the station, there is a small memorial to respected rock climber and high altitude mountaineer Dr ‘Fred’ From, who died in a climbing accident on Mt Everest at the young age of 28.