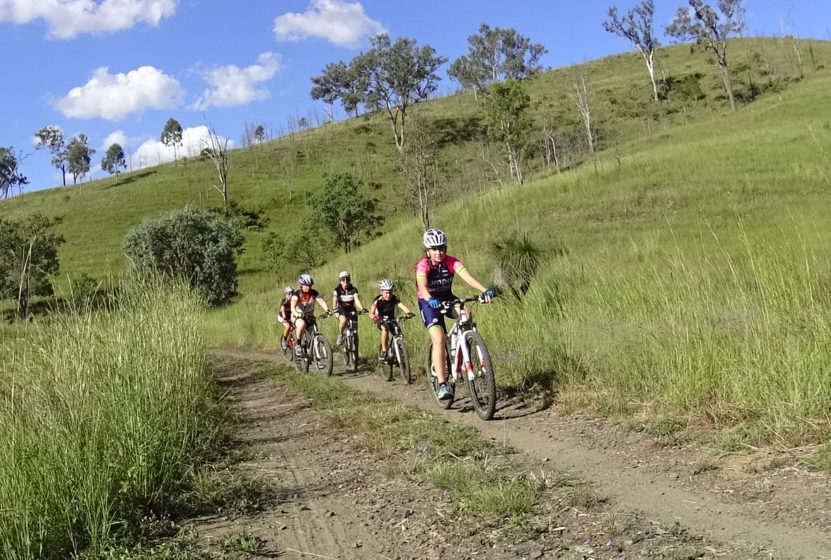 As published in the local paper The Somerset to keep local residents informed:

It’s been a big Easter week-end out on the Brisbane Valley Rail Trail.

I cycled with two of our committee members from Linville to Yarraman return on Saturday. There were loads of cyclists and a number of walkers and horse riders. The Linville camp site was chock a block with campers, many of them with mountain bikes.

The Brisbane Valley Rail Trail has also become popular for people seeking a real challenge. Last year, Andy Handyside cycled the entire length of the rail trail in 8:16:20 and famous long distance runner, Ron Grant, walked the entire rail trail at the age of 73 in 3 days and 6 hours.

When I first started campaigning to get the Brisbane Valley Rail Trail completed, there was virtually no traffic on it. It was virtually unknown. I soon realised that if the campaign was to be taken seriously, we needed to turn that around. The Queensland Government was unlikely to invest in a grossly under-used tourism asset.

With the cooler months just commencing, it looks like this season is going to be fantastic for tourism on the Brisbane Valley Rail Trail. It will be worth hundreds of thousands of dollars per annum to local tourism operators over the next few years. Somerset Regional Council has estimated that it will be worth $1.5 million tourism dollars per annum to our region within five years after completion. That does not take into account the money multiplier effect as that money flows through our local economy, encouraging business investment and creating jobs.

When we first started the campaign, two sections of the Brisbane Valley Rail Trail were incomplete – Ipswich to Wanora and Toogoolawah to Moore.

Ipswich to Wanora has been completed, including a $3.5 million concrete bikeway extension from Wulkuraka Station to Diamentina Blvd. This is proving very popular, with Ipswich residents heading out to Fernvale, Lowood and beyond. Visitors from further afield can take the train to Wulkuraka Station and then head out on the Brisbane Valley Rail Trail in a traffic free environment all the way to Yarraman.

Well, almost. There is signed by-pass route from Toogoolawah to Moore on pleasant, minor country roads, but when that section is completed it will be a jewel in the crown. It passes through spectacular Queensland countryside with great views of the upper Brisbane River.

Somerset Council has estimated the cost of completing the Toogoolawah to Moore section at $3.5 million due to the large number of challenging creek and road crossings. The Queensland Government has allocated $1.8 million from the former ‘Royalties to Regions’ fund and Somerset Council has applied for a grant for the remainder from the Federal Government ‘Building Stranger Regions’ fund. With the Federal Budget coming up on 9th May and Federal Elections expected later this year, I think we can expect an announcement about that very soon.

I believe this will be the year that the Brisbane Valley Rail Trail really lights up. We will have record numbers of users out on the trail and work will commence on completing the Toogoolawah to Moore section, which includes the heritage listed Yimbun Tunnel.

When the 161 km Brisbane Valley Rail Trail is completed, it will be Australia’s Great Adventure Rail Trail.

Wouldn’t it be fantastic if we could get it completed in time for the Commonwealth Games?

It will make a huge difference to our local economy, bringing in tourism dollars from all over Australia and overseas.

The Brisbane Valley Rail Trail will be a game-changer for tourism in our region.

Photo caption: Family group cycling up the range from Linville on the BVRT