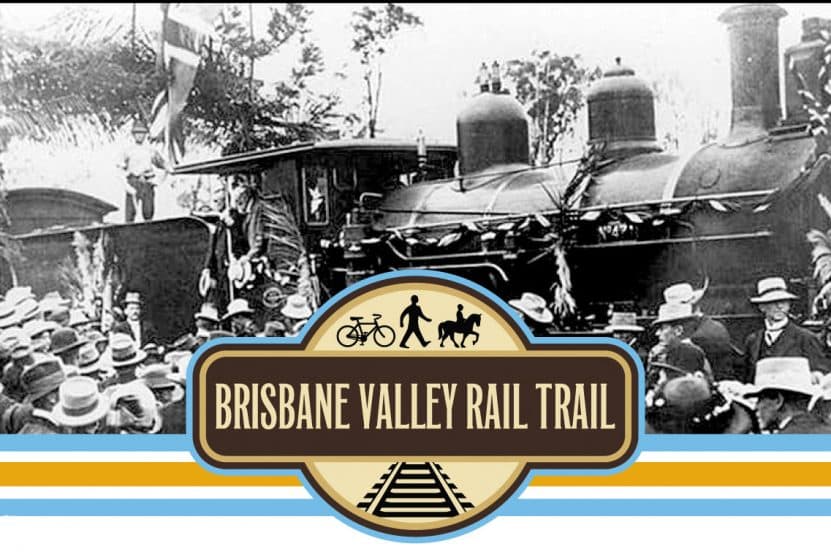 History of the Development of the Brisbane Valley Rail Trail

The first section of the rail trail was developed by the former Esk Shire Council on the old railway line between Fernvale and Lowood, which opened in 2003.

In 1996 two Nanango Shire Councillors, Mayor Reg. McCallum and Councillor Kevin Allery; were in negotiation with representatives of QR to develop a rail trail on the disused Brisbane Valley train line for cyclists, horse-riders, and walkers.  In the early stages, representatives of the Esk Shire Council also attended these meetings.  By 2006 the Nanango Shire Council had developed such a trail on the Blackbutt Range from Linville to Blackbutt and it was opened on 3 June 2006.  In November of that year, Mayor McCallum accepted the prestigious Queensland Outdoor Recreation Federation (QORF) Government achievement award on behalf of the Nanango Shire Council for their/its opening of the rail trail.

On 22 January 2007, the Deputy Premier and Minister for Infrastructure (Anna Bligh) earmarked $3.6m for the development of a recreational Trail from Ipswich to Blackbutt on the disused rail corridor. By 25 November 2007 the original Linville to Blackbutt Rail Trail had been extended to Moore and opened to the public. In May 2008 a Steering Committee was established to oversee the development of the Brisbane Valley Rail Trail under the SEQ Regional Recreation Trails Program (SEQ Active Trails) by the Department of Infrastructure and Planning, in partnership with local councils.  The first Chair of this Steering Committee was the member for Ipswich West, Wayne Wendt, M.P.

The McCallum horse yards were opened to trail riders on 25 May 2008 and by 11 September a volunteer group, called the ‘Ambassadors of the Brisbane Valley Rail Trail (Moore to Blackbutt)’ had been incorporated to encourage and promote recreational usage of the rail trail between Moore and Blackbutt.   The Rail Trail was opened to Coominya on 15 September 2008 and by 25 September both the Harlin Rail Bridge and the Yimbun Tunnel, both built in 1910 and existing features of the old rail line, were heritage listed.   The Fernvale to Lowood section of the Brisbane Valley Rail Trail was opened on 12 July 2009 at the beginning of the Fernvale-Lowood Fun Run for that year.  Two weeks later the Rail Trail from Esk to Coominya was opened at Esk.

The Rail Trail was opened to Coominya on 15 September 2008 and by 25 September both the Harlin Rail Bridge and the Yimbun Tunnel, both built in 1910 and existing features of the old rail line, were heritage listed.   The Esk to Fernvale section of the Brisbane Valley Rail Trail was opened on 12 July 2009 at the beginning of the Fernvale-Lowood Fun Run for that year.  This is the only section of the Brisbane Valley Rail Trail developed by the Somerset Regional Council.  Two weeks later the Rail Trail from Esk to Coominya was opened at Esk.

The section of the Brisbane Valley Rail Trail from Ottaba to Toogoolawah was opened on 28 November 2009 by which time signage for the railway precincts had been developed by another volunteer organisation, Brisbane Valley Heritage Trails Inc.

In May 2010, sixty members of the Australian Trail Horse Riders’ Association (ATHRA) had their inaugural ride from Fernvale to Blackbutt on the Brisbane Valley Rail Trail over 9 days and the Somerset newspaper questioned, “whether the government and council continue to maintain the quality of the trail and the amenities..” In June new Rail Trail amenities were opened at Benarkin and by September the trail had been extended from Blackbutt to

In June new Rail Trail amenities were opened at Benarkin and by September the trail had been extended from Blackbutt to Nukku, where the opening was celebrated at Blackbutt.  Also in September pupils from Benarkin State School cycled to MacNamara’s camp where there had been a tent school for the children of railway workers before it was relocated to Benarkin as the rail line reached there.  They unveiled a plaque to commemorate the tent school before cycling on to Linville State School.  In December 2010 the Toowoomba Regional Council agreed to extend the Brisbane Valley Rail Trail from Nukku to Yarraman that was the rail line terminus.

Since that time the maintenance of the Rail Trail has been undertaken on a contract basis by a State-funded Rail Trail Ranger, Toowoomba Regional Council  and the Ambassadors of the Brisbane Valley (Moore to Blackbutt) who now operate under the auspices of the South Burnett Regional Council.

The final stages – by Paul Heymans

Local community activists led by Paul Heymans initiated a Change.org petition combined with a social media campaign calling on Somerset Regional Council to apply for funding to complete the two incomplete sections from Wulkuraka Station to Wanora and from Toogoolawah to Moore. They also organised a series of popular cycling events to demonstrate the Brisbane Valley Rail Trail is a valuable tourism asset.

Somerset Regional Council agreed to apply for the funding early in 2015, but shortly afterwards, State elections were called and there was a change of Queensland government.

Unphased, the local community activists launched a new Change.org petition and campaign calling on the Palaszczuk Government to fund completion. The campaign focussed on the economic benefits to the local rural economies of the regions it passes through. It was signed by 1183 supporters and presented to the Queensland Parliament by State members Jim Madden and Deb Frecklington on 16 September 2015.

The campaign achieved its objective when on 16 January 2016, Deputy Premier, Jackie Trad announced $1.8 million funding to complete the Brisbane Valley Rail Trail, plus $2.5 million over 10 years to maintain it.

The section from Wulkuraka Station to Wanora was already partly constructed at the time the project was mothballed, so it was completed within a few months of the funding announcement.

Despite early expectations, work to complete the section between Toogoolawah and Moore took another 12 months before it was fully funded. There were several major creek and road crossings that posed significant civil engineering challenges. The project was independently costed at $3.354 million and Somerset Regional Council successfully applied to the Australian Government’s Building Better Regions Fund for a $1.45 million co-contribution to complete the rail trail.

The grant was awarded on Friday 4 August 2017. Contracts for construction work to complete the Toogoolawah to Moore section were awarded to A & M Civil Contracting. As a condition of funding, the work had to be completed by 30 June 2018.

The project was completed on time. On Tuesday 7 August 2018, there was an official opening of the final section of the Brisbane Valley Rail Trail between Toogoolawah and Moore by Somerset Mayor Graeme Lehmann, Federal Minister for Regional Development, Territories and Local Government Dr John McVeigh and Assistant Minister for State Development, Manufacturing, Infrastructure and Planning Julianne Gilbert. The opening was also attended by State member for Nanango and Leader of the Opposition, Deb Frecklington, Somerset Councillors, and Paul Heymans, President of the Brisbane Valley Rail Trail Users Association.

After 11 years since the project was first announced in 2007, the entire 161 km length of AUSTRALIA’S longest recreational rail trail is now officially open to the public.

A few months later, as the icing on the cake, the heritage listed Lockyer Creek Bridge was renovated b y DTMR at a cost of $4.5 million and opened to the public just in time for Christmas 2018.