BVRT is emerald green after the rains 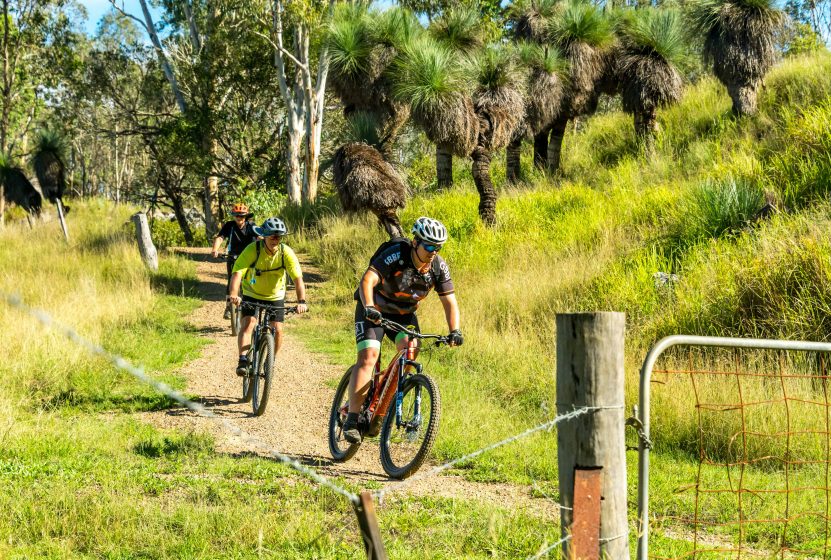 ‘Of all the paths you take in life, make sure a few of them are dirt.’ (John Muir).

The moment my bicycle tyres hit the dirt surface of the BVRT, I can feel myself beginning to relax. It’s as if I passed through a doorway that leads to a better place.

Every time someone ventures out on the rail trail, they create a new story.

The stories told are often of great personal achievements, of people transcending the routine of their daily lives.Back in 2014, a lone cyclist on a Cannondale leftie was the first person to cycle the entire length of the rail trail in a single day even before it was completed.

Now people ride the entire length of the rail trail nearly every week, whether in one day or over a few days.

Last year, a novice cyclist ventured a few kilometres out from the Brassall bikeway in Ipswich, then scurried back to the safety of home. But then each week she ventured a bit further and a bit further, until one day she completed the entire rail trail in one day. Just awesome.

The couple who wanted to do cycle touring but had no experience. They tried it out on the rail trail and get completely hooked, later sending us Facebook posts from places exotic and far away.

An Alaska Iditarod MTB racer who routinely trains on the rail trail, recently sent me a message late at night to tell me it’s -2.0°C in the gullies.Oh yeah, it can be cold in winter, but nighttime is a great time to enjoy the rail trail. These days it’s in use 24-hours a day and the cool of the very early morning and late evening are great times to beat the heat of the Queensland summer.

A couple recently cycled the whole trail to celebrate their wedding anniversary. I bet they’ll remember that one for many years to come.

A former Olympic cyclist and professional road racer recently set a record of 11hr 41m 51s for the fastest time to ride the full length of the rail trail in both directions.

That’s faster than the trains back in the day. They used to take 6 hours from Wulkuraka to Yarraman, depending on how long the crew spent in the Linville Pub.

I think I probably hold the record for the slowest time, but I don’t care. I just love to be out there.

I feel immensely lucky as the BVRT is my local trail. I’ve been cycling up and down it about 2-3 times a week for 8 years now. Last year I clocked up about 5000 km on the rail trail.I never tire of it – each time is a bit different, and I know it so well that I notice the small seasonal changes from one week to the next.

Right now, the rail trail is the best I’ve ever seen it. The surface is in mint condition after the rain and the countryside is so green – it’s almost an Irish green.

The BVRT is great for family and friend’s time. It’s wonderful to see families and groups of friends out enjoying the rail trail.

During 2021, the BVRT was a godsend for many who sought to beat the pandemic blues, but 2022 is a new chapter, an opportunity for renewal.

Whatever your skills and experience, whether a beginner or an experienced cyclist, the BVRT offers something for everyone.

What’s your BVRT adventure going to be in 2022?