Check list for organisers of large events on the... 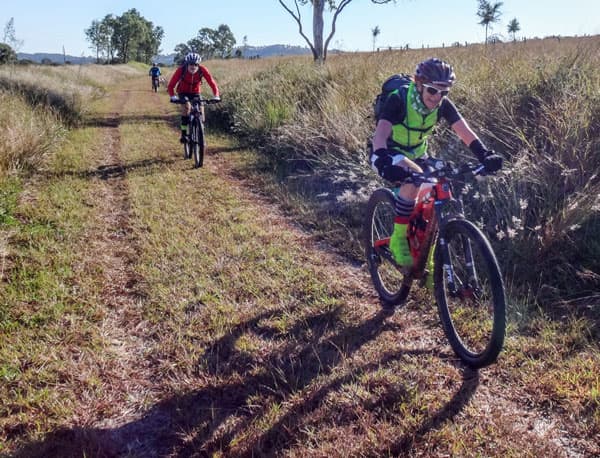 Last Friday, whilst most people were asleep in bed, ultra endurance Rebecca Stone smashed the previous record for the fastest time to cycle the 167 km from Wulkuraka Station to Yarraman Station, and back in under 24-hours. A total distance of 334 km.

Rachel Edwards was the first woman to ride the BVRT both ways in 22h 16. This was an impressive time, beating the fastest time by a male cyclist by about 1 hour, but to be fair, the men who completed the challenge were not aiming to set the fastest time, but just to survive until the end.

Rebecca Stone smashed the previous record by just over 4 hours in a time of 18 hrs and 11 minutes, a quite remarkable achievement.

She started at 6.00 pm on Friday evening and rode all night with very powerful lights designed for off-road cycling. She had multiple batteries to last her for the ride.

The Brisbane Valley Rail Trail Users Association organised the support logistics for Rebecca Stone’s epic ride. Seven male cyclists volunteered to pace her in a relay and they all had to work hard to keep up with her. We also organised food drops because she would be riding all night.

Paul Heymans, President of the Brisbane Valley Rail Trail Users Association said, “I rode with Rebecca from Toogoolawah to Moore in freezing conditions in the small hours of the morning. Rebecca was incredible strong. I was riding an e-bike and had to work hard to maintain the pace.”

Close to the end of her ride. Rebecca Stone said, “This challenge is the hardest thing I’ve done. People don’t realise – it’s much harder than the Merida 24-hour race at Hidden Vale Adventure Park. Overall this was an amazing experience and I loved the entire journey and enjoyed meeting new people who I am sure will be instrumental in helping me with the next phase of my endurance journey. To undertake this within 24 hours is not a journey for the unprepared or untrained individual.”

Paul Heymans said, “There is something very special about the Brisbane Valley Rail Trail that brings out the best in people. Whether it’s achieving an amazing personal challenge or volunteering to help, people just love to be involved with the BVRT.”