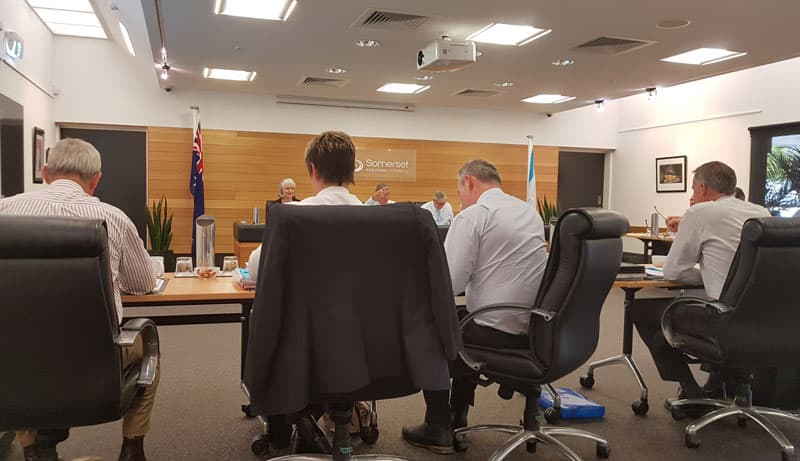 Community activism for a project such as the Brisbane Valley Rail Trail certainly takes some stamina. Even when you think you have it in the bag, there will be an interminable series of obstacles in the way of achieving the final objective.

I attended the Somerset Regional Council meeting today as the report prepared for the Queensland Government was on the agenda for approval by the Councillors.

It’s now 8 months since the announcement of funding to complete the Brisbane Valley Rail Trail was made. At the time, I was advised the $1.8 million allocated would be more than enough to complete the job with some left over for “gold plating” of other sections, and that the job should completed by the end of 2016/early 2017.

The Queensland Government still takes the view that $1.8 million is more than enough to complete the Toogoolawah to Moore section. When combined with the $2.5 million over 10 years for maintenance, they describe it as a “sweetheart deal”.

But there seems to be no basis for the $1.8 million costing that I can deduce. It appears to be a number pulled out of a hat.

At the request of the Queensland Government, Somerset Regional Council has recently completed a very thorough costing for doing the work. They cost the essential construction work to complete the Toogoolawah to Moore section at $2,903,719.20.

So now we have all the ingredients for a standoff. On one hand, Somerset Regional Council is saying that the job should be completed and it should be completed to a reasonable standard. On the other hand, the Queensland Government is saying, ‘that’s your lot mate, if you want to spend more, then you should make a co-contribution’.

I raised the possibility of a co-contribution with Somerset Councillors. They were supportive, but the economic outlook for local Councils all over Queensland is looking bleak. With zero debt, Somerset Regional Council is in a better position than most, but a small ratepayer base combined with cutbacks in funding at both State and Federal level are having an impact. In addition, Somerset Regional Council recently had an application for grants to replace some old timber bridges knocked back, so the full cost of that essential work will fall back onto them.

At the meeting today Somerset Council passed the following motion:

“THAT Council advise the Department of Main Roads that when agreeing in principle to be involved in the future management of the Brisbane Valley Rail Trail, Council did so with an expectation that the work to complete the trail would be undertaken to the same standard that had applied to work already undertaken. Council therefore expects that the work to complete the Toogoolawah to Moore section of the Brisbane Valley Rail Trail will be undertaken as detailed in attachment A with an estimated cost of $2,903,719.20.”

Frankly, I’m not sure where that leaves us. The Queensland Government may put the work out to tender to see if the private sector can come up with a cheaper offer. They might be willing to consider topping up the funding. Or they may not.

If not, then the whole project may be dead in the water. I hope not.

In the eyes of the community, the Queensland Government made a commitment to complete the Brisbane Valley Rail Trail. It turns out the funding allocated falls short of the amount required. Clearly, they need to take a close look at the costing submitted by Somerset Regional Council and have a long hard think about how they’re going to meet their commitment.

As I’ve said before, for the very first time since the Brisbane Valley Rail Trail was first conceived, the planets are in alignment for completion of this great project. The Somerset community is behind it, Somerset Regional Council is behind it, and the Queensland Government is behind it. What is needed now is for everyone to give one last big push.

Together we can get this over the line.