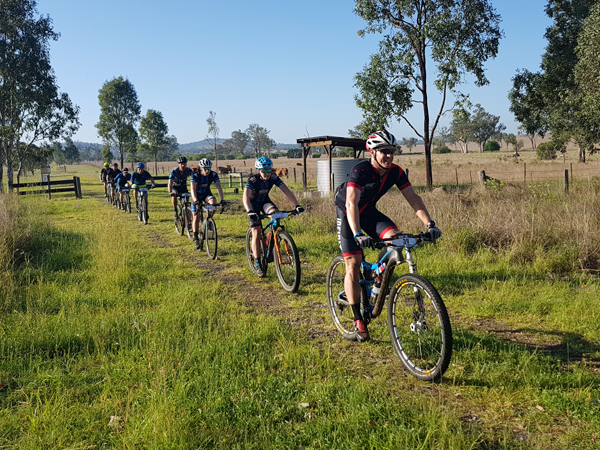 Early on Saturday morning, eighty cyclists assembled at the start line in Esk for the inaugural Brisbane Valley Rail Trail 100 km cycling challenge, some looking to win the event, some looking just to survive until the end.

The challenge was to cycle on the Brisbane Valley Rail Trail from Esk to Yarraman (including the Toogoolawah to Moore detour route) within 10 hours.

Total distance 97.6 km with a net height gain of 375 metres on a fairly rough track.

Andy Handyside, winner of the men’s BVRT 100, described the action in the breakaway group at the front end:

“Starting at 6.00 am in Esk we were off northbound at breakneck speed. Mark and I controlled the front of the pack keeping the pace high for the first 15km, quickly paring the group down to 8 riders who stayed together until Linville and the beginning of the climb.

Once the trail tilted upwards, the speed of the day and the tempo up the range further cut the group to 4 riders.

An unlucky flat tyre for Steven left three of us to figure out the order of the podium.

Knowing the run into Yarraman I got to the front and managed to stay there to take the win.”

The Brisbane Valley Rail Trail is no ordinary rail trail. It‘s a bit of a challenge, especially when it kicks up the range from Linville. Race competitor, Chris Irish described the 22 km climb as “…relentless, unforgiving and sucks the life out of you.”

Plans are already under way for the BVRT E2E EXTreme and the BVRT 100 in 2018 as part of the celebrations for the opening of the completed Brisbane Valley Rail Trail.