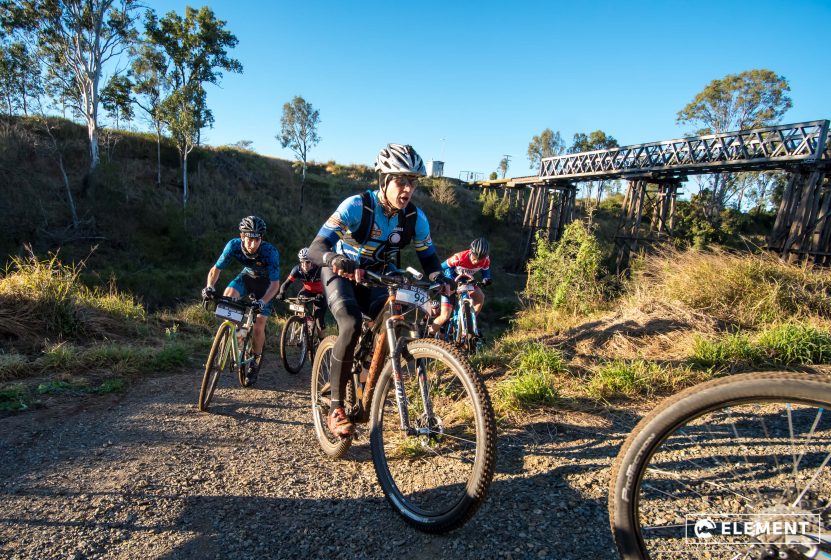 I remember the day very clearly. We were supporting an organised bike ride for the ‘Chicks Who Ride Bikes’ from Moore to Esk and had arranged morning tea for them with a baby Koala display at the Toogoolawah Station.

A lone male mountain biker turned up asking for some water. “Sure, no problem. Where did you start?”  we enquired. “Wulkuraka Station”

“Where are you headed?” “Yarraman.”

And he jumped back on his bike and headed off whilst our jaws were still dropping.

“Is that even possible, we asked ourselves?” Yep, he did it.

It started as a bit of a joke, but gradually the idea of an extreme bike ride along the entire 167 km length of the Brisbane Valley Rail Trail began to take hold in our imagination.

We started planning for a challenge bike ride from Wulkuraka Station to Yarraman. The aim was to set three new records for the fastest man and fastest woman to complete the whole BVRT in under 12-hours, and for the most number of people to complete the entire BVRT in a single day.

For those who are familiar with the Brisbane Valley Rail Trail, south to north is the hard way to do it. The rail trail is rough in places, there are some tricky gully crossings, and there is a 430-metre height gain between Wulkuraka Station and Yarraman, with a long 22-km climb up the D’Aguilar Range from Linville.

Organising and supporting an off-road endurance bike ride over such a long distance is a logistical challenge that required a support crew of 22 volunteers. We had to organise transport from Yarraman back to their cars in Wulkuraka for people and bikes, implement a risk management plan and organise first aiders, a bike mechanic, check in points, food-stations, sweepers at the back to ensure no-one was left behind, toilets, a mobile coffee vendor, satellite tracking, satellite phones, numbered bike bibs, certificates of completion, grand prizes for the fastest times, event corflutes, the list is endless.

After months of planning, last Saturday 5 August was the big day. We initially expected we might attract around 30 long distance cyclists, but 119 showed up on the day.

The event had captured the imagination of cyclists from all over Australia. One woman even travelled from New Zealand just to take part.

For the volunteers, the big day started at 4.00 am as we moved everything into position. Our vollies spread out to open gates, put out signs, organise road crossings, set up an electronic check-in desk, organise portaloos, SAG wagon, first aid station, coffee vendor, food stations, check points, radio links.

From 5.00 a.m. the cyclists started to assemble in the predawn chill to check-in at event control at Wulkuraka Station.

There was a pent-up tension as the Start time of 6.00 a.m. approached.  A few words from BVRT chaplain and bike mechanic Fr Ian Bailey, and then they were off.

We knew they were going to be fast, but this was insane. The lead riders averaged 30 kph to the first food station in Lowood, arriving at 07.06, then on through Coominya by 07.32, and so it went on as they raced across the Queensland landscape.

By Toogoolawah there was a 3 hrs 15-minute difference between the front runners and the rear of the ride.

We had a tiger by the tail – the support crew had to accelerate our deployment just to keep up with them as the action started to evolve like a road race.

In the words of Andy ‘Hubcap’ Handyside on Facebook:

“A mad dash from the start saw the chasing group I was in average nearly 30km/h to Lowood in pursuit of the lone leader. We settled into a good rhythm, rolling turns, working smart and keeping the tempo high. The group mostly held together through to Toogoolawah where we diverted out onto the bypass route.

With Peter setting a cracking pace the group was whittled down to Pete, Mark, Mitchell, eventual winner Peter, and myself.

Getting an update at Moore that we had taken the lead, the pace went even higher up the (Blackbutt) range eventually seeing Mitch fall away. As the trail flattened on the run into Blackbutt the two Peters both attacked with Brocky able to follow and I was left to suffer alone in pursuit.

The front 3 stayed away and although I got back within visual range of Brocky, I couldn’t close the gap to him. At least he shouted the first jug at the pub!

Happy to roll home in 4th place, 2 minutes behind the winner. Great fun to follow wheels and attacks and stay within the top 10 from tape to tape.

Congratulations to Paul and his merry volunteers on an amazing event, can see this becoming a classic in years to come!”

The volunteers were kept very busy at the Finish line in Yarraman, recording finish times and handing out certificates of completion. The winners and every single person who completed the entire 167 km length of the Brisbane Valley Rail Trail in under 12-hours, including the detour route from Toogoolawah to Moore, contributed to three new records:

Some feedback about the event from social media:

“That was a truly gruelling yet awesome event yesterday, bit sore today but at least I’m not bed ridden.“

“What a ride! That was a tough day out for me, just making cut offs, but I made them all. Awesome event.”

“Well what a huge day it was. A big congrats to Paul Heymans and all his team of volunteers. Thankyou. My personal favourites of the day were #1. All the local folks cheering and supporting our mad passion. #2. Riding with a super-fast group and like-minded mates pushing myself. #3. Riding with the Bulls #4 The cold beer at the end.”

“Brutal ride, spectacular scenery (timeless) & a great opportunity to mix with some locals, thank you for your efforts and encouragement was always something to look forward to arriving at the stations!”

“Huge thanks to Paul, the Ranger, volunteers, and the whole team for the awesome event.  Wow,  what an epic and seamless day you guys pulled off. Had an absolute blast, and am looking forward to the next one ;)”

I’ve come to have a strong belief in Rail Trail Karma. The rail trail brings good things to everyone who has faith in the project. The weather for the inaugural Brisbane Valley Rail Trail 167 km E2E Extreme Challenge bike ride could not have been better. Everyone who participated in the ride came in bone tired but with huge smiles on their faces.

The Brisbane Valley Rail Trail Users Association has done the hard yards. Our promotions have massively increased traffic on the rail trail and proved the economic benefits. It’s events like this that make it worthwhile. Many of the participants visited the Brisbane Valley Rail Trail multiple times whilst training for the event. The event itself contributed in the region of $10,000 to local businesses. Many participants said they plan to come back with their friends and families.

Our special thanks to Lowood SUPA IGA, Esk Friendly Grocer and Toogoolawah IGA for their sponsorship and support of the feed stations at Lowood, Esk and Toogoolawah. We would also like to thank local businesses and Wild Horse FM 99.7FM community radio station for their support at the Finish line in Yarraman. And a big thank you to Visy who donated rolls of corrugated cardboard to protect the bikes whilst being transported on the trucks.

And a big thank you to the 22 volunteers who played such an important role in making this event such a success.

Breaking news of a Federal Government grant of $1.45 million from the ‘Building Stronger Regions Fund’ that will enable Somerset Regional Council to complete the Toogoolawah to Moore section was the icing on the cake.

It’s been a long road, but the end is in sight. Let’s get the job done.