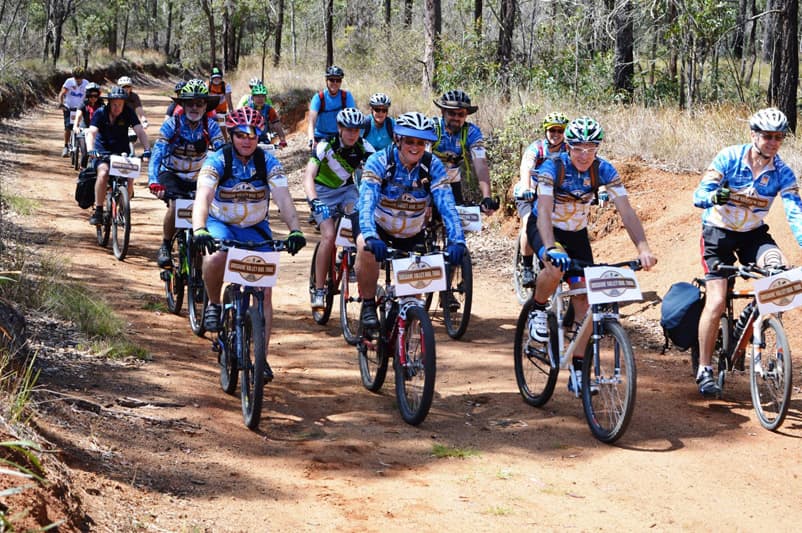 Elizabeth Gilbert, the author of ‘Eat, Pray, Love’ believes that life is full of creative opportunities looking for someone to inhabit.

So it was when I first became involved in a serious way with the Brisbane Valley Rail Trail.

Back in 2014, I used to write a popular weekly column for the local newspaper, The Somerset. A newspaper column is a hungry beast that must be fed, so I was always looking for new material to interest my readers.

The Brisbane Valley Rail Trail construction project had been “mothballed” when the Newman Government came to power in Queensland in 2012 due to “lack of funds”.

An unfinished Rail Trail does little to fire up the imagination, especially when the marketing was also pretty average.

But times change. Roll the clock forward to May 2014 with State elections looming and $3.5 million grant funding was announced in the State Budget for the completion and construction of Rail Trails as part of the Newman Government strategy to stimulate tourism in Queensland.

I was aware back then that Somerset Regional Council had serious reservations about taking on any financial responsibility for the maintenance of the Brisbane Valley Rail Trail, so they would be reluctant to apply for the funding without a solid push from the community.

I decided to create a Change.org Petition calling on Somerset Regional Council “To apply for grant funding to complete the Brisbane Valley Rail Trail.”

I expected the Petition might attract a couple of hundred signatures if I was lucky, but it would give me something to write about.

To my surprise, over the next few days the number of signatures just went up and up. The final tally was 1,181 signatures, including some very influential people.

I had great material for my column that week, but then what?

It was all a bit embarrassing because I actually had very little experience of the Brisbane Valley Rail Trail. With success there is responsibility, so I announced that I would cycle it from end-to-end.

I persuaded a few friends to join me at Wanora and former State Member for Ipswich West, Sean Choat, came out to see us off.

I had given up cycling a few years earlier, so the first 15 km from Wanora to Lowood was literally a pain in the bum. Lack of fitness, lack of a saddle hardened behind, and over-inflated tyres made for a rough ride.

The ride from Lowood to Coominya the following week was promoted on social media and former Somerset Cr Jim Madden came to see us off.

To my delight, some new supporters turned up to ride with me. Complete strangers, but they became good friends and fellow advocates for the Brisbane Valley Rail Trail as the campaign progressed.

As we ticked off each section between the major towns, our little cavalcade grew in numbers until we arrived in Toogoolawah with an escort from the local horse riding clubs who are also keen to get the Brisbane Valley Rail Trail completed.

Toogoolawah was significant because we came up against the barrier of the incomplete section from there to Moore. Mayor Graeme Lehmann, Cr Dan Hall and Cr Helen Brieschke joined us for morning tea and a few speeches were made, but no-one said the magic words, “We will apply for the funding”.

By this time what had started out as a project to create material for my weekly column had turned into something much bigger. I was well and truly hooked by the heritage and beauty of the Brisbane Valley Rail Trail, but as a local businessman and vice-president of the local chamber of commerce, I was also motivated by the insight that completing the project would be a huge economic boost for the towns it passes through

But there was one major problem. No-one was using it. That’s right, due to lack of effective marketing, it was virtually empty. Apart from the occasional traveller, we had it to ourselves. It certainly wasn’t going to be easy to persuade anyone in State or Local Government to invest a few million dollars in a tourism asset that was so under-used.

Our first task was to turn that around, so we set out to prove the Brisbane Valley Rail Trail could be made to work. The final stage of our first End-to-End ride from Yarraman to Moore was heavily promoted on social media and we did something we had not done before – we hired a coach and organised transport for the bikes from Moore to Yarraman, so people could drive to Moore, leave their cars there, and then cycle back to their vehicles instead of cycling both ways.

We had a good turn out and it was a fantastic ride. We also learned that transport is a key element to a successful event on the Brisbane Valley Rail Trail.

What started as an idea to create material for a newspaper column became a passion to get the Brisbane Valley Rail Trail completed.

Many people have gone before me. The idea to turn the old railway line into a recreational rail trail was first conceived by former Nanango Shire Councillors, Mayor Reg McCallum and Councillor Kevin Allery back in 1996. A lot of work went into lobbying for the concept over the next few years until in 2007, the Deputy Premier and Minister for Infrastructure Anna Bligh allocated $3.6m for the development of a recreational Trail from Ipswich to Blackbutt on the disused rail corridor.

We should also pay tribute to former State member, Wayne Wendt, historian Libby DeLacy and the Ambassadors for the Brisbane Valley Rail Trail and the many people who worked on the project within the various State government departments, local government and also the wider community.

In December 2014, we made a major break-through when Somerset Regional Council passed a motion proposed by former Cr Jim Madden to apply for funding to complete the Brisbane Valley Rail Trail, subject to the terms and conditions. We knew from discussions with LNP State member for Nanango, Deb Frecklington, that the money would be forthcoming just as soon as Somerset Regional Council applied for it.

Job done, it was in the bag or so we thought.

Not so, far from it. A few weeks later, the State elections were called and there was a change of government.

We picked ourselves up and dusted ourselves off. Time for another Change.org Petition, this time calling on the Queensland Government to “Please fund completion of the Brisbane Valley Rail Trail, to make it the longest continuous Rail Trail in Australia and New Zealand”.

Every time someone signed the Petition, an email copy was sent to Deputy Premier, Jackie Trad.

1,401 supporters signed the Petition this time around. We also supported the campaign through social media, doing interviews, press releases and continuing to organise great events on the Brisbane Valley Rail Trail that just kept on growing in size.

Organising the campaign was pretty full on, but we successfully demonstrated that completion of the Brisbane Valley Rail Trail was an investment worth making.

By late 2014, we had developed very good working relationship with the bureaucrats involved in the management of the Brisbane Valley Rail Trail who also wanted to see the project completed. We knew that by running a very positive campaign we were gaining ground, but we didn’t know the precise details.

On 12 January 2015, I received an email from the Queensland Government. When I read it I nearly fell off my chair.

We had achieved our goal. The attached letter advised that the Queensland Government had agreed to allocate $1.8 million to complete the Brisbane Valley Rail Trail, plus 2.5 million over the next 10 years to maintain it.

It was an amazing outcome – not only will there be sufficient funds to complete the Brisbane Valley Rail Trail, but the allocation of $250,000 per annum for maintenance addressed Somerset Regional Council’s reservations.

The Brisbane Valley Rail Trail was a hot potato during the recent local elections, but the project emerged stronger than ever before when the voters elected a Councillor team that is 100% committed to completing it.

Somerset Regional Council moved from being lukewarm about the project to being keen to get the job done, especially as ongoing maintenance costs have been covered.

There is still much to be achieved, but the fact that work is under way is a tribute to all the people who shared the dream and supported the campaign.

The Brisbane Valley Rail Trail is a great piece of tourism infrastructure with enormous potential.

The southern section from Wulkuraka station to Wanora is very nearly completed and should be officially opened soon. When the whole Rail Trail is completed, people will be able to take a train to the station and follow the Brisbane Valley Rail Trail for 161 km all the way to Yarraman in South Burnett. Many more will cycle or walk as far as they can go in a day and that will bring them to the towns in the Brisbane Valley.

Work should commence on the Toogoolawah to Moore section in a few weeks with a probable completion date in early 2017.

The activists who worked on the campaign have formed the Brisbane Valley Rail Trail Users Association Inc to see the project through. We continue to organise events and lobby for improvements to the existing track as well providing community input about the new construction.

It hasn’t all been plain sailing. There are those who have motives to disrupt and harass our work, but that goes with the territory for anyone who has any success in modern society. Some very malicious, petty-minded and frankly rather stupid people seem to suffer from an acute case of ‘tall poppy syndrome’.

As a direct result of our activities, local tourism and catering businesses are reporting a significant increase in rail trail related traffic and this is matched by our observations out on the trail.

In May of this year, Bicycle Queensland organised a cycling event on the Brisbane Valley Rail Trail as part of Bike Week 2016 with over 300 participants. They’re planning a repeat event for 500 cyclists next year.

In the absence of any online marketing by government agencies, I recently developed a website to promote Brisbane Valley Rail Trail tourism which is now well established as the premier Internet resource for anyone seeking information about the Brisbane Valley Rail Trail (www.brisbanevalleyrailtrail.com.au). If the current trend continues, visitor statistics will exceed over 4000 unique visitors this month.

There has also been increasing media interest in the Brisbane Valley Rail Trail.

We assisted Channel 7 to film a segment about the Brisbane Valley Rail Trail for ‘Creek to Coast’ that was broadcast a few months ago.

We provided some support for the ABC 612 Brisbane ‘Spencer Howson Breakfast Show’ when Spencer Howson broadcast his popular early morning radio show from towns along the Brisbane Valley Rail Trail for 5 days as he cycled from Wulkuraka to Toogoolawah with his producer, Bernadette Young. He’s planning to come back to complete the other half when the Toogoolawah to Moore section has been completed.

The Otago Rail Trail is now an Internationally renowned tourism icon. To achieve that level of success, the Otago Central Region local government and business owners worked hard to make it happen.

The Brisbane Valley Rail Trail is going from strength to strength and will continue to grow. We all need to get behind it so the benefits can flow through our region.

It will have taken 21 years, but Reg McCallum and Kevin Allery’s vision to convert the Brisbane Valley Railway line into a great recreational rail trail is very close to completion.

When the Brisbane Valley Rail Trail is completed in 2017, we’re going to have a very big party.

It will be ‘The Great Australian Rail Trail’.